What is Red Light Therapy?

The therapy applies different wavelengths of light at different intensities and pulse rates to affect or modulate the body's biological function. Cellular optimization cascades down into and benefits nearly every tissue, organ and system in the body.

Red light therapy stimulates natural cellular processes, similar to how specific wavelengths (at the opposite end of the light spectrum) can be used to treat psoriasis or vitiligo.

Red light therapy (also known as Photobiomodulation) uses a combination of red and near-infrared light to activate a number of biological processes.

The Whole Body Photomodulation Bed is used for improving blood circulation and inflammation, pain and cellular repair and increasing energy.

Whole-body Red Light Therapy treats your body, from your head to toe, all at once and will help 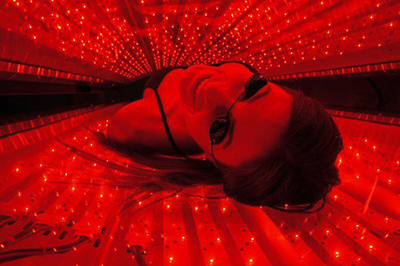 Treats the Source of Pain

Drugs cover pain up by interfering with chemical signals.

Frustrated by the lack of sleep? or Aggravated by those nagging aches and pains. Red Light Therapy is used to:

Stay on your feet

Whether it's an injury or a workout, Red Light Therapy can help you get back on your feet, faster by

How does Red Light Therapy Help?

As a therapeutic technique, Red Light Therapy is specifically used to treat:

What is Red Light Therapy used for?

Red light therapy is typically used by doctors, physical therapists, and pain clinics as a highly effective non-invasive treatment with no known side effects.

It is also used by professional athletes to improve performance and reduce the incidence of injuries.

Our bodies are made up of thousands of cells and as we age so do our cells.

Mitochondria are structures within cells that convert the energy from food into a form that cells can use. Each cell contains hundreds to thousands of mitochondria, which are located in the fluid that surrounds the nucleus (the cytoplasm)

Mitochondria are the powerhouse where the cell’s energy is created. Mitochondria allow the cells to make up tissues, tissues make up organs, and organs make up humans.

One of the key benefits of photobiomodulation (PBM) is its ability to improve mitochondrial function.

Like an engine in a car, mitochondria are the motors that power the cell. As those motors wear out the cells die which leads to dysfunction from aging.

Photobiomodulation can rejuvenate the life of the cell and even merge damaged mitochondria to create 'giant mitochondria'. It is kind of like replacing a worn-out 4 cyl engine with a brand new V8.

When cells age and become stressed, the mitochondria produce Nitric Oxide (NO) which competes with oxygen and often wins.

This mitochondria molecule blocks the receptor site that Oxygen binds to during the respiratory process (the process of turning sugar in the blood into cellular energy).

With a diet rich in antioxidants and rest, our body manages excess Nitric Oxide. If the body is too stressed it cannot properly remove enough Nitric Oxide fast enough. This causes “reactive oxygen species” (ROS) and is known as Oxidative Stress.

Reactive Oxygen Species are toxic and can cause:

Conditions including Alzheimer’s, osteoarthritis are just some conditions related to this process.

RLT produces a biochemical effect in cells that strengthen the mitochondria, this allows increased energy, so cells can function more efficiently and rejuvenate and repair the damage.

When red and infrared light is absorbed by a protein in the mitochondria called Cytochrome c Oxidase (CcO), the toxic mitochondrial Nitric Oxide (NO) is dissociated from the protein CcO. This allows oxygen to move more freely in the body, and the cell to function optimally.

A single treatment lasts less than 15 minutes. It's relaxing and will leave you feeling better than ever.

You can use red light therapy every day. Most people don't see much benefit in using it more than once per day. For handheld treatments, your practitioner will advise you as to your treatment plan.

Red Light Therapy has been studied in over 500 human trials and 4,000 lab studies.

The manufacturer the ARRC LED Whole Body Photobiomodulation Bed is considered a subject matter expert by researchers, hospitals, and governmental bodies including the US Congress and the UN.

The ARRC LED ATP system is a Class II exempt medical device that is FDA Approved for minor aches and pains:

“It's been incredible. Life-changing.” After three treatments I was pain-free for the first time in 7 years.